This is our first year with our new pond and we love it. It was lot of work, but we are so enjoying it this summer. And we haven’t had any problems with raccoons, which was one of the main reasons for changing what we had.

Before last fall we had a much smaller, pre-form plastic pond which was there when we moved in. We very much enjoyed it, but there were some problems. 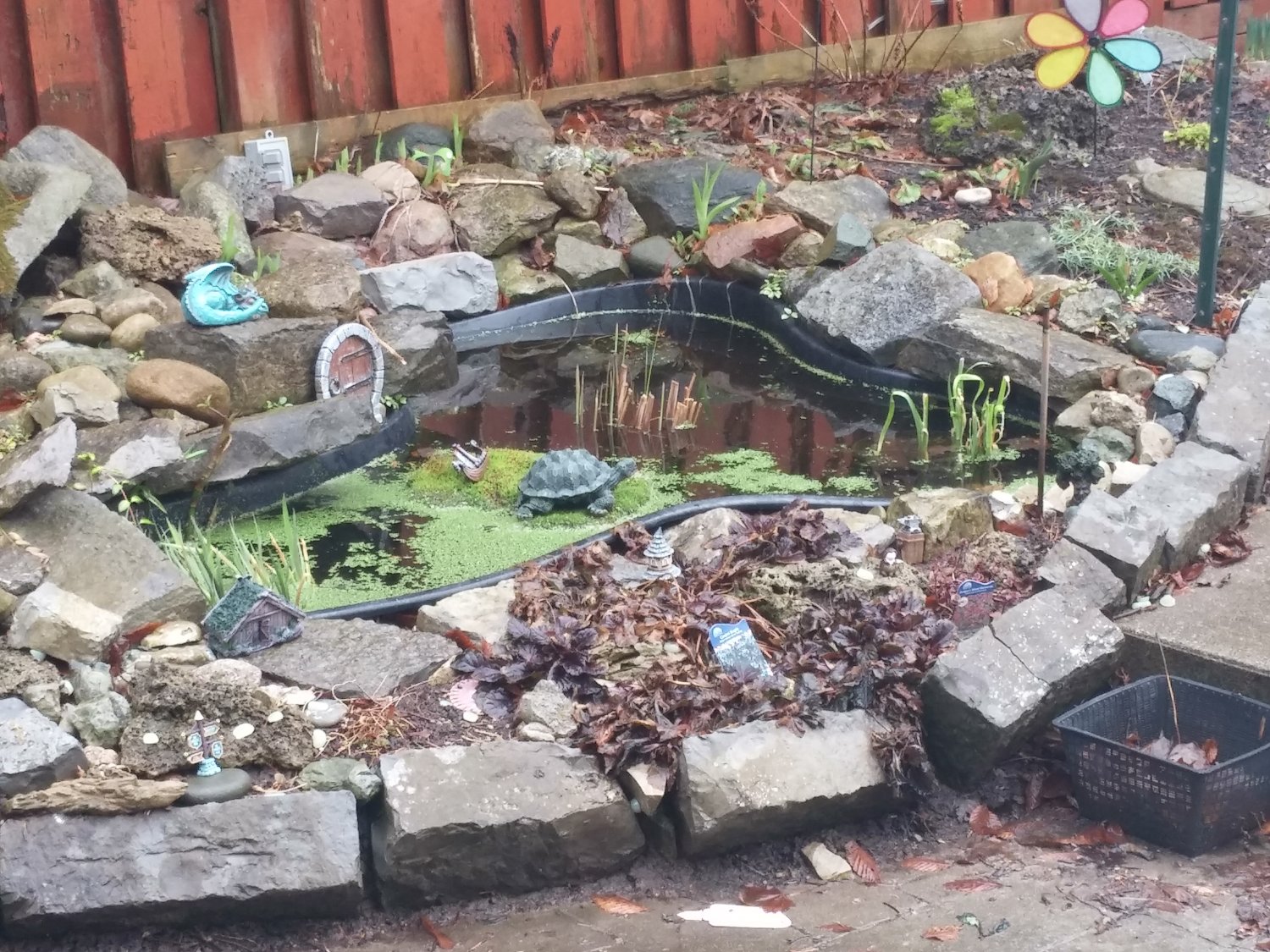 For one thing, it was small. This means that there were limits to the numbers and types of fish and plants we could have. We really wanted a nice lily, but were unable to keep one alive for some reason.

Raccoons were also a problem. With the shallow shelves going all around the perimeter it was too easy for them to go fishing. We lost many fish, snails and frogs to them, which was frustrating.

Over that last few years we (mostly Nicole) planned and schemed. We read and researched and discussed. And finally we were ready to do something.

Last fall we dug up the old pond and dug a much larger, deeper one with a single shelf along half of the back wall. We took down the waterfall and decided to put the big moss rock in the middle with a fountain on the one side and a nice lily (which prefer calm water) on the other.

After we smoothed the walls and trimmed all the roots and removed all the pebbles, Isaac climbed in and folded all the corners of the liner nicely. We decided to cover the front with some of the rocks from the pile we’d removed from around the old pond and used $ 1^{'}\times1^{'} $ patio stones around the other 3 sides.

And here it is. Our new pond. 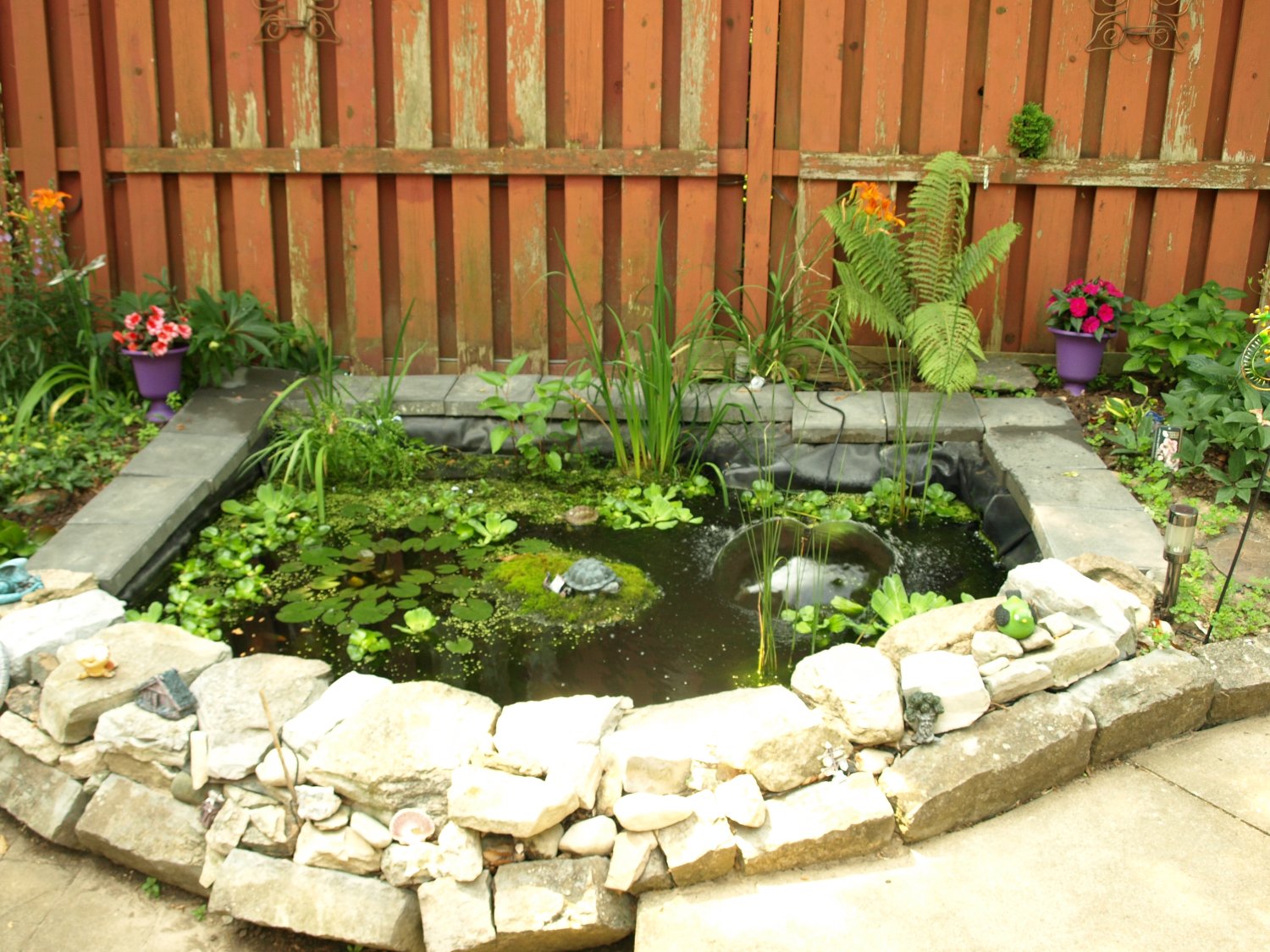 We really love shubunkin goldfish . We’ve been buying them from Moore Water Gardens ever since we moved in. Unfortunately it was difficult to keep them over the winter because of the raccoons.

Here are some of them. 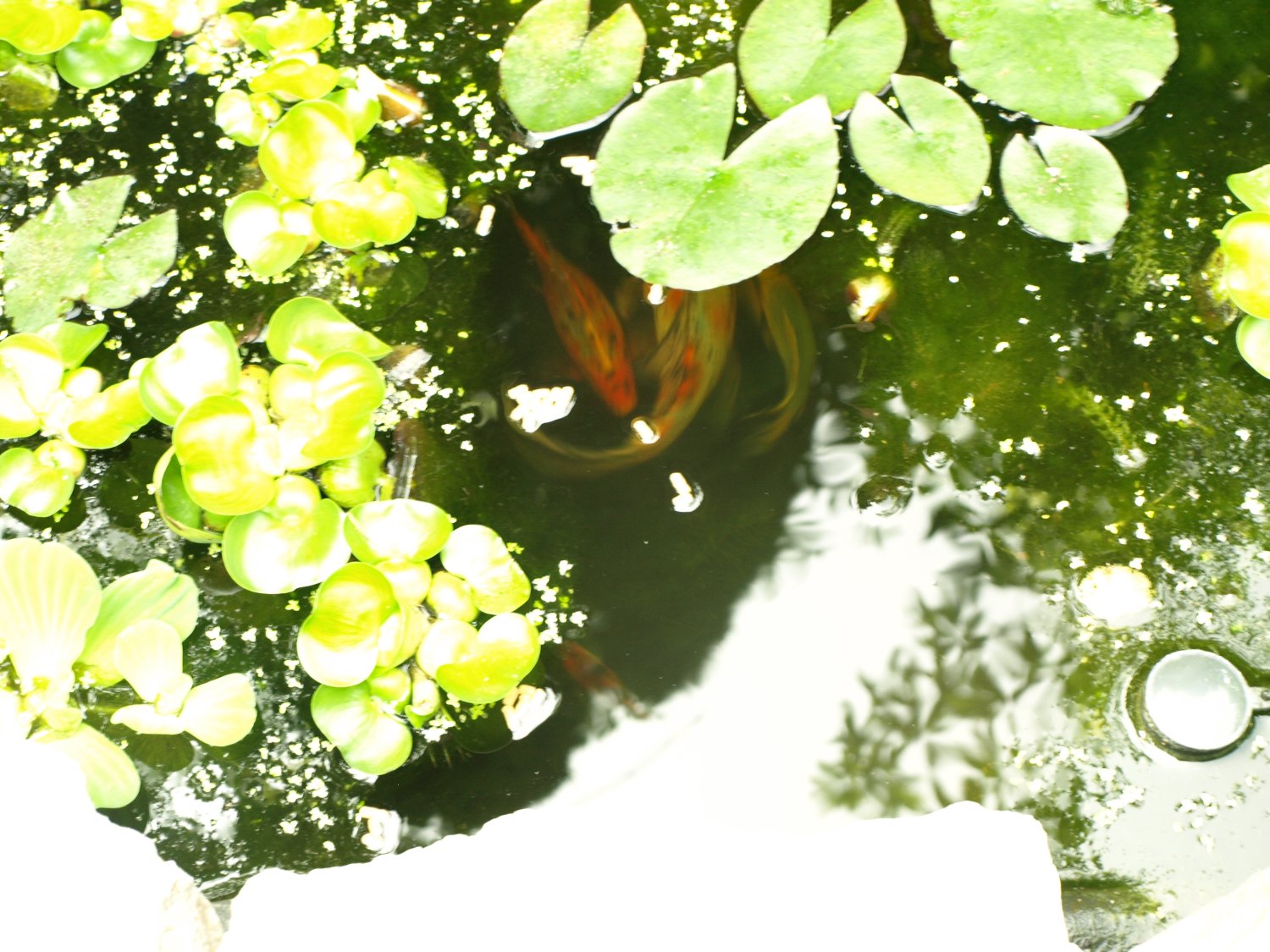 And our biggest shubunkin, Biggie. 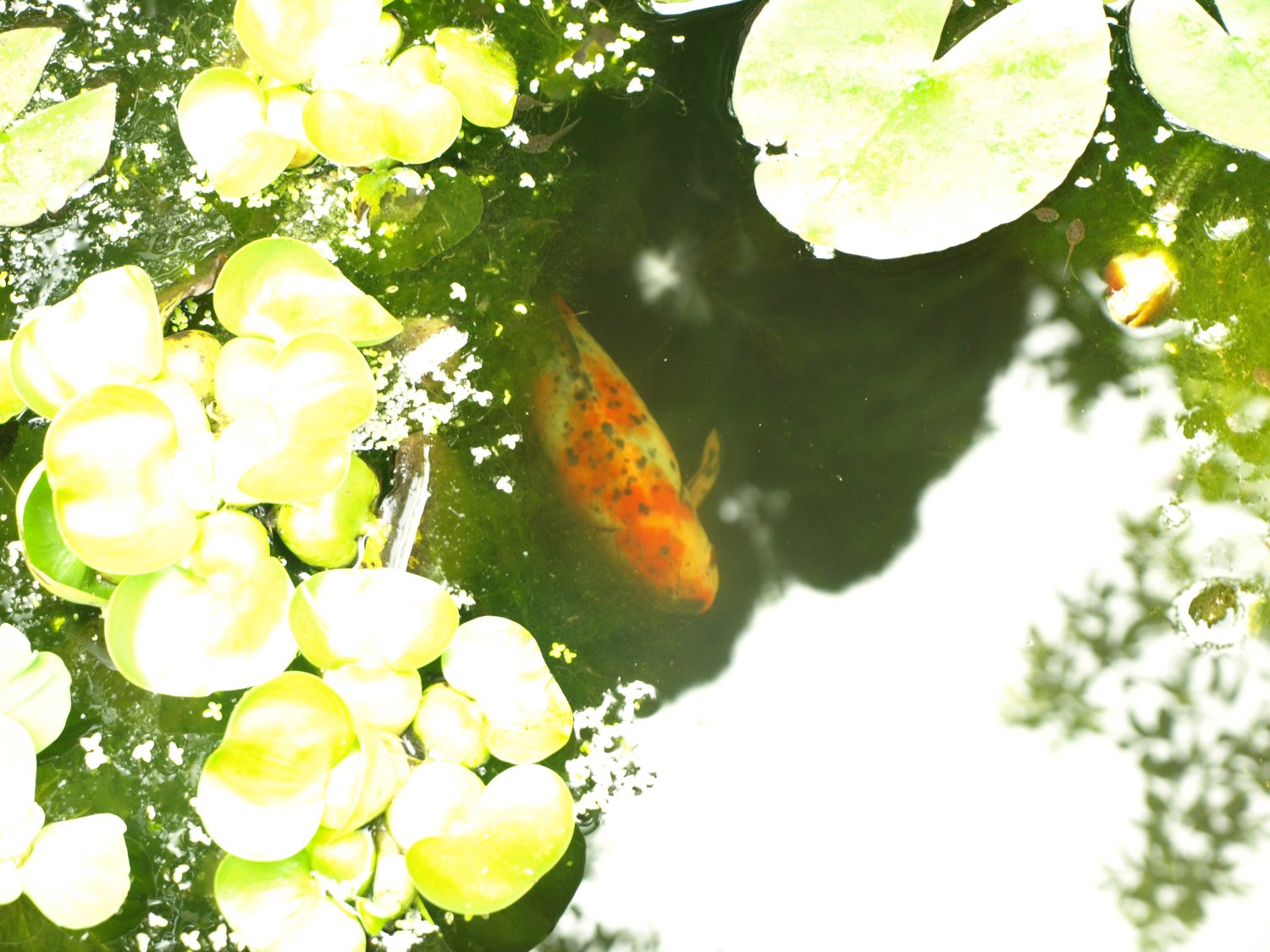 We kept the two biggest fish indoors in a makeshift ‘pond’ of my own design this past winter. We tried to overwinter some plants as well, but that failed miserably. We really wanted to populate the pond with lots of shubunkin, at least one frog and lots of snails.

With only two fish, though, we really wanted to get more. We decided to contact a woman we met on a local tour of ponds the previous summer. She had promised us some shubunkin and she delivered. Her son caught us 3 more, Goldie, Whitey and Spike.

At least one of them must be a female, because in the last few days we’ve caught sight of some tiny little fry as well. We’re looking forward to seeing what interesting colourations they’ll exhibit.

We’ve had trouble keeping frogs over the years. They always seem to want to wander off in search of either girls or a bigger pond.

This year we got a couple of frogs from a friend in the neighbourhood who has a backyard full of ponds and plenty of denizens. We named them Romeo and Le Frog. 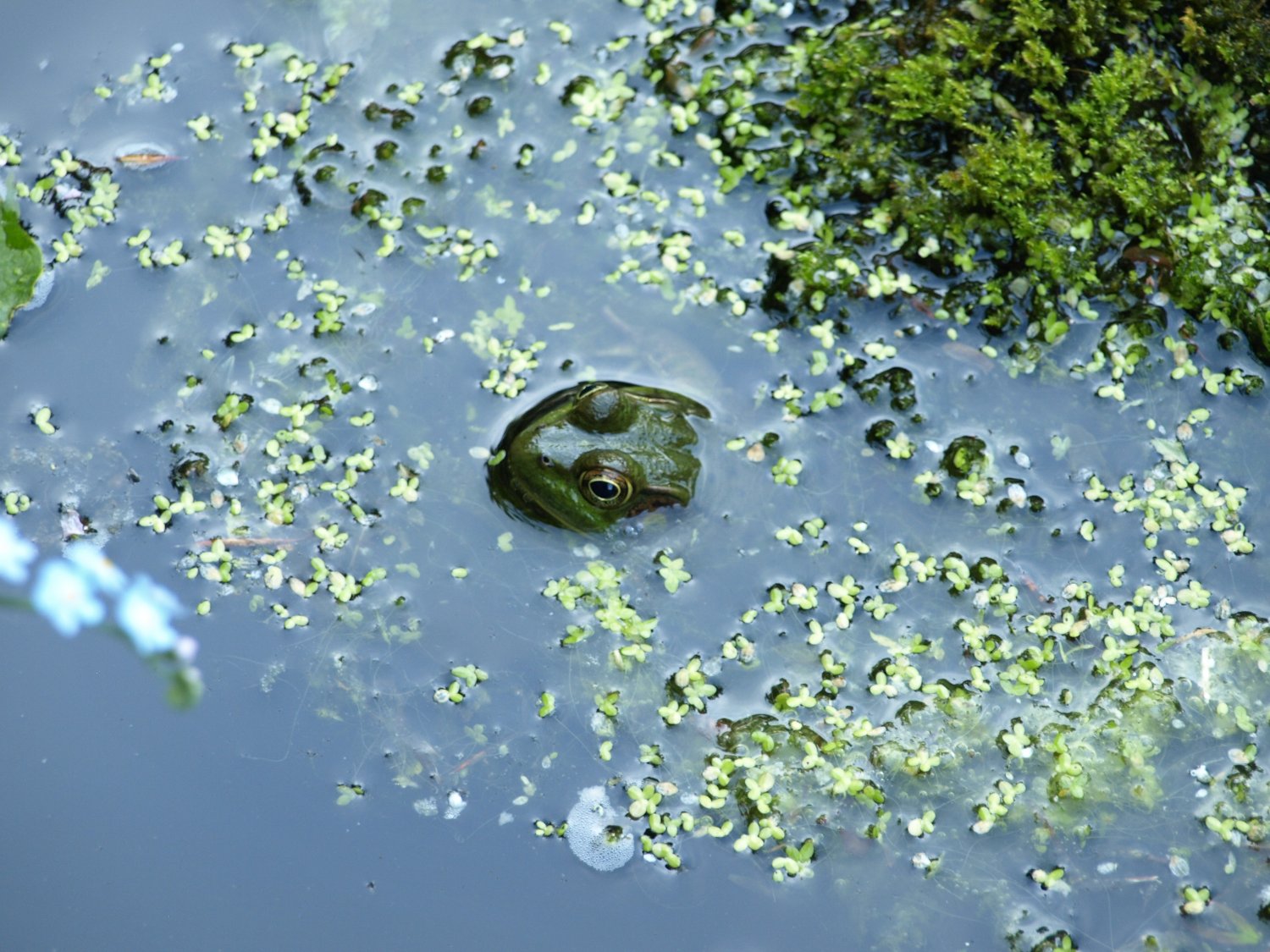 We were hoping for a female, but neither of them were (as is evidenced by the names), so we asked for another. Our friend came through with a female that he had observed laying eggs. We installed Babette in the pond and Romeo was chasing her around within minutes.

The next morning, Babette was gone, but she had left behind probably a hundred eggs. Nicole was very happy, especially when they began to look like tiny little stripes.

Within a couple of days Le Frog had gone. A week after that, Romeo had left as well. Greener pastures, I guess. A couple of weeks later the little eggs, now looking almost like the tadpoles they should become, were also gone.

We thought that the fish or something else had eaten them all. Nicole was very disappointed… but we were wrong. They reappeared as little tadpoles, and there were dozens and dozens of them. 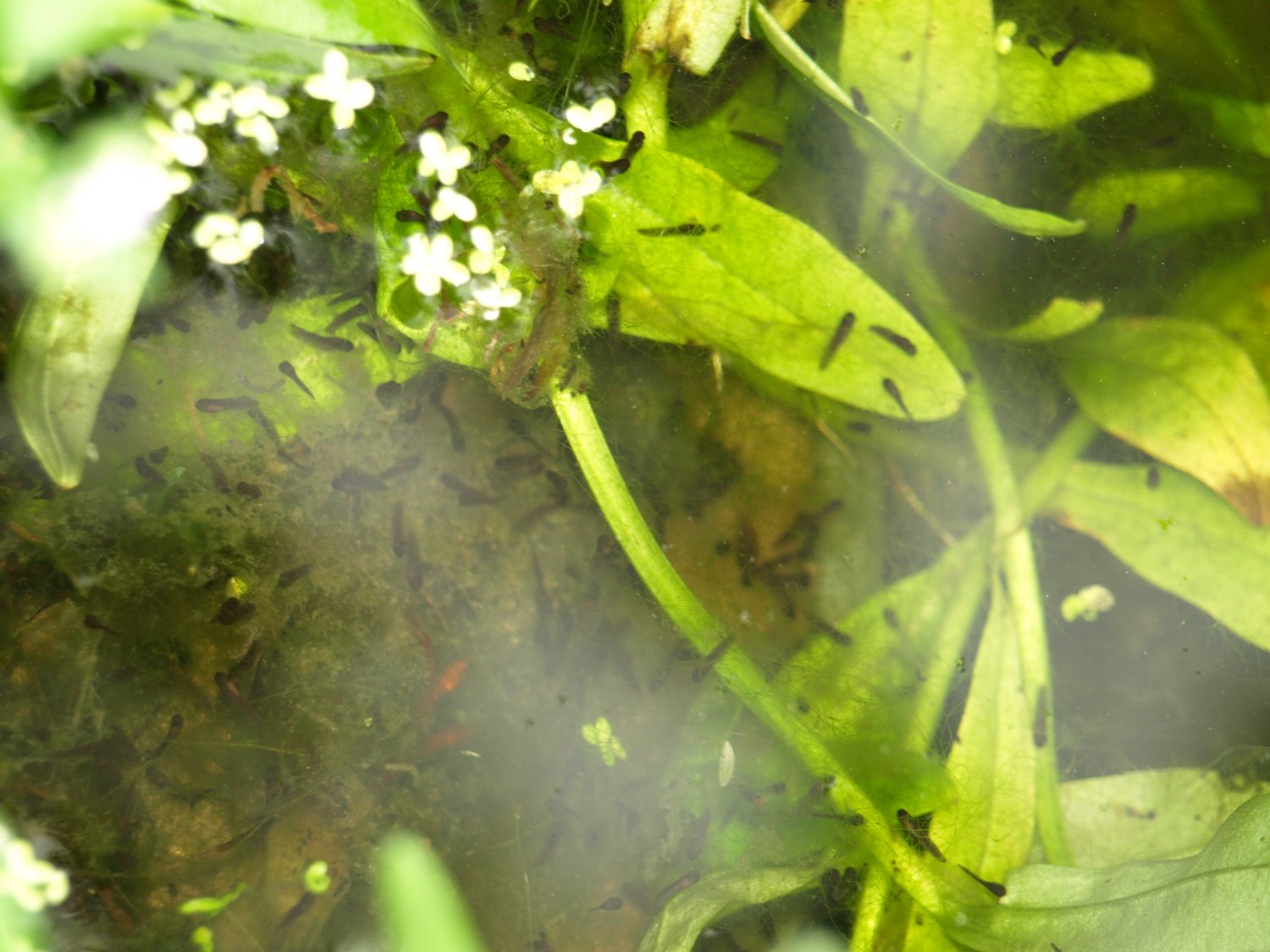 Now they are everywhere in the pond. They eat the algae and they even move the fishes' food around on the surface of the water as they attempt to munch on it at feeding time. We couldn’t be more pleased. We’re waiting to see if some of them metamophose this year or if we’ll have to wait ‘till next spring.

We’ve tried a lot of pond plants over the years. One of our favourites was the floating heart. It is prolific and very invasive in a natural pond, but in an enclosed pond like ours it was perfect. It sent its leaves and flowers everywhere. Unfortunately ours died and then it was outlawed and we couldn’t find one anywhere. 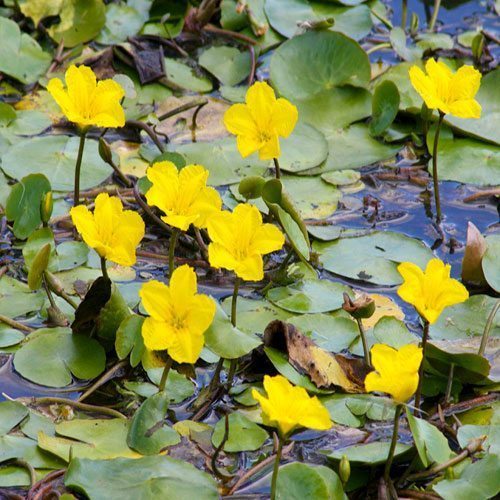 Our new lily is gorgeous, though. It has big, beautiful spotty leaves, and the flowers change colour from creamy yellow to pink as they mature. 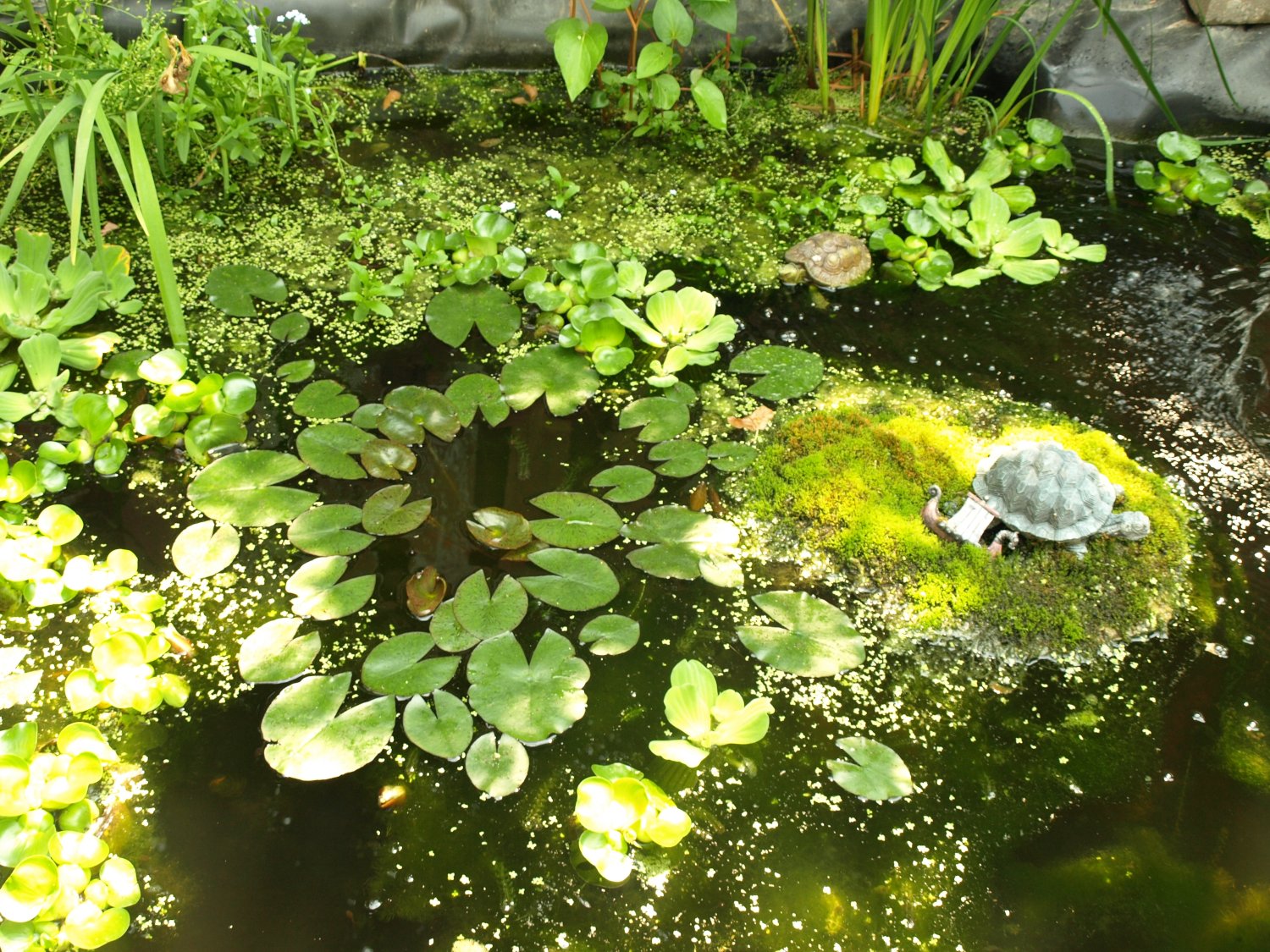 We also have a lot of duckweed, dwarf hyacinths and water lettuce. They provide cover and the fish love them. The Gamecock Iris is also gorgeous. 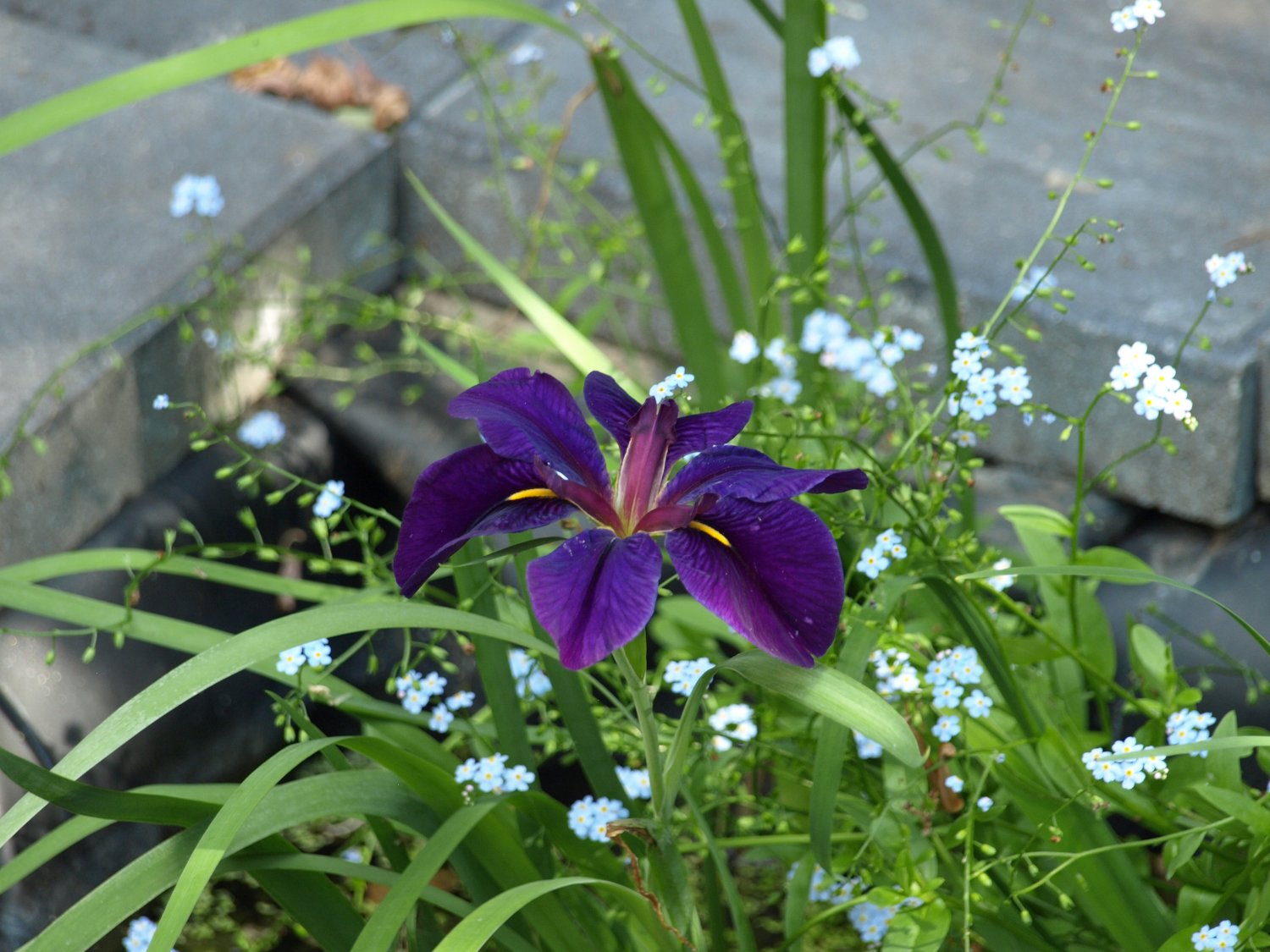 It was lot of work, but we’re very happy with our new pond. We (especially Nicole) spend time out there every day watching the fish dart around and the tadpoles and the little fry play hide and seek among the plants.

We thank our Lord daily for this beautiful thing we’ve made, and for the creatures He has given us to enjoy. We don’t forget that every good thing comes from above (James 1:17 ESV).